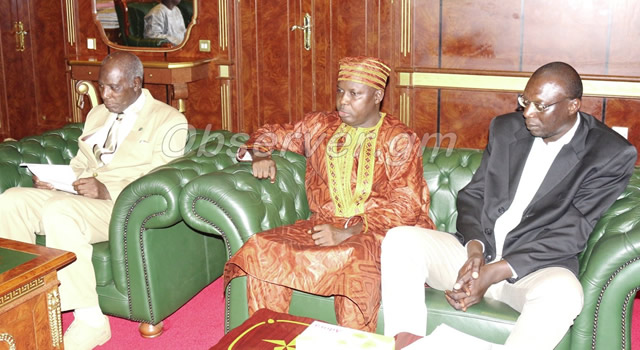 A fifth commission member of the Independent Electoral Commission (IEC) was sworn in on 28th September 2016, completing the set up of five-member commission as mandated by law.

Presided over by the Vice President and Minister of Women’s Affairs, Her Excellency Dr. Aja Isatou Njie-Saidy at her office at State House yesterday, Lamin Cham took three oaths of office, secrecy and allegiance. He swore to carry out his duties without fear or favour, affection or ill-will in accordance with the Constitution and other laws of The Gambia.

The swearing-in was administered by the Cabinet Secretary, Adama Ngum-Njie.

Vice President Njie-Saidy congratulated Mr Cham on the new appointment and commended him for accepting it. She assured that the Government of The Gambia is ready to fully support the Commission, saying they are playing an important role in the country. “We recognise the work of the Commission and their commitment in sensitising the public on election processes,” she stated.

Hon. Sheriff Bojang, Minister of Information and Communication Infrastructure and Mama Fatima Singateh, the Attorney General and Minister of Justice, both congratulated Mr Cham on the appointment and assured him of Government’s support to him and all the other commission members.

Ministers Bojang and Singateh agreed that IEC has a crucial role to play in Gambia’s electoral processes which they said made it important to appoint experienced people like Cham as commission members.

Commissioner Cham in his statement thanked the Gambian leader, His Excellency Sheikh Professor Alhaji Dr Yahya Jammeh for the appointment and assured that he will execute his functions as expected on him.