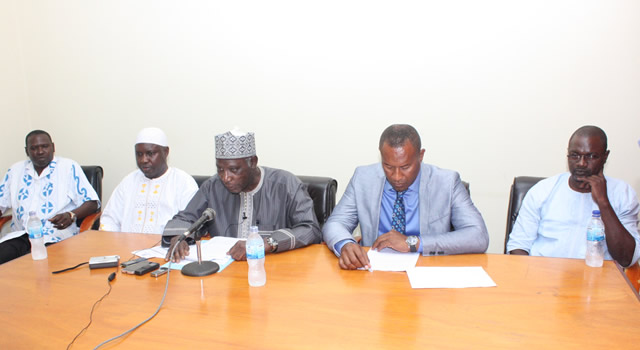 The launching, which was held at the Commission’s Head Office in Bertil Harding Highway was organised in  the form of a press conference and ended with a question and answer session during which the doubts of representatives of the various political parties were cleared. The theme for this year’s Election is “The Gambia Decides; I am voting, are you?”.

Speaking at the event, Alieu Momar Njai, Chairman of the IEC described the event prominent for the fact that it contains vital issues and information relevant for public consumption. According to him, among this year’s Election activities of the Commission, a supplementary registration of electors (voters) was done. He added that the total number of registrants during the supplementary registration is 89, 649, saying the number of voters now stands at 886, 578 as opposed to 796, 929 in year 2011. “The number of polling stations is 1422 as opposed to 1300 in the last election,” he affirmed.

Chairman Njai further stated that lost, mutilated and defaced cards can be replaced with a fee of D100 until the 29th of September, 2016. “The number of constituencies is now 53 as a re-demarcation of constituencies was done. Fresh registration was not conducted in the affected areas but the commission will resort to putting constituency stickers on the voting cards of the affected voters to bring that situation in consonance with law on Election Day,” he assured.

The ICE chief said this year’s election will continue to be accurate, transparent, free and fair, whilst appealing to the stakeholders and the general public to make it violent free. “The Government of The Gambia has provided all the requirements to have the 2016 Presidential Elections done perfectly as planned,” he disclosed.

Njai went on to inform the general public that election to The Office of President of The Gambia will be conducted on Thursday, 1st December 2016 in exercise of the Commission’s mandate under section 46 of the constitution of The Gambia and Section 40 of the Election Act.

Acting under Section 47 of The Constitution and 42 (1) of the Election Act, the Chairman as well informed the public that the Commission will receive nomination of candidates for this year’s presidential election from 7th to 10th November, 2016 at the IEC Headquarters.

Also acting under Section 85 of the Election Act, he further announced that the campaign period for this year’s Presidential Election will be held from Wednesday the 16th of November, 2016 to Tuesday the 29th of November, 2016. “Nomination papers can be collected from the IEC Headquarters by the 3rd October, 2016. Polls for this year’s election will open at 8am and close at 5pm. Counting will be done immediately after the close of polls and polling stations would be converted to counting centres,” he disclosed.

Funded by The Gambia’s Government and UNDP, Chairman Njie said IEC is partnering with the National Centre for Civic Education and other stakeholders in order to engage a massive voter sensitisation.